Juliet left Miami for Turks and Caicos on November 23, 2013 with a boat load of eager passengers and crew. The forecast was mixed, calling for some beautiful weather on day one but then building quickly the next day so we spent the first 2 days diving in the protection of Cat Cay before headed across to Nassau. After saying goodbye to Bull Run, Moxon Rocks, Tuna Alley the crew and passengers hunkered down for the rough ride across the Tongue of the Ocean. 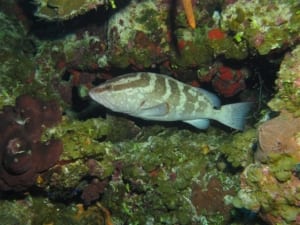 Tongue of the Ocean is where some of shallowest water in the Bahamas meets some of the deepest, and with the winds forecasted it was no surprise that the ride was rolly. Winds were not favorable for holding sails so everyone just powered through. Nassau was a welcome sight on the horizon and the passengers were eager to get in the water at the 3 Wrecks right outside the Nassau Harbor entrance. The night dive had lower visibility than normal at Periwinkle Reef due to the high winds kicking up some sand off the bank, and the same for the Blue Hole in the morning – Trevor and crew had a hard time even finding the Blue Hole itself, never mind the mooring!

Once we hit the Exumas, everything took a turn for the better. The winds died down to a manageable 15-20 knots, and the diving off the east side of the Exumas was spectacular! Great visibility, sharks, lionfish hunting, and gorgeous walls. But another front was hot on our tails so we took advantage of the weather and rode the edge of the front across the Exuma Sound and all the way to Conception Island where we decided to spend all of Thanksgiving!

Conception Island as usual did not disappoint, pristine walls, great protection, wonderful wildlife, and some exciting dinghy rides to the island itself. Rusty made an amazing Thanksgiving dinner with all the trimmings that was enjoyed by all!

The next morning found Juliet on an adventure to a new destination – Crooked Island. John had dove here once 8 years ago and hadn’t had much time to look around so we decided to give it another shot. Trevor jumped in the water just east of the Bird Rock Lighthouse and was impressed with the dramatic profile of the wall and the marine life so we dropped anchor and dove in! The divers agreed that it was well worth diving – and a better place to be than the mall on the day after Thanksgiving, so they all decided to name the dive Black Friday. Another couple hundred yards down the wall to the east, another great spot on the wall was discovered, this one closer to the airport and loaded with every species of Angelfish, so it was dubbed Angel’s Landing. The afternoon was spent lobstering at Coral Columns farther down the island, where dinner was caught, and then consumed!

The weather fairy was on our side for the remainder of the trip, and we spent a day at the isolated Hogsty Reef, 80 miles from anywhere and home to some of the most pristine and dramatic diving in the Bahamas. Here we did some more exploring, named another dive site (Sponge Plunge), and gave thanks for good weather and great diving.

Sunday morning we finally reached our destination and spent the next 2 days diving around West Caicos and French Cay, searching for the elusive Spotted Eagle Ray and being entertained all day on the last day by an early-season humpback whale!

All said and done, passengers did 33 dives at 10 different locations and covered 450 miles in 11 days! It was one of the best repositioning trips of recent memory and will be a tough one to top. We’re hoping for a repeat performance in March when we head back to Miami – except without the rough weather at the beginning.

Stay tuned for the next trip report in January from St. Thomas!